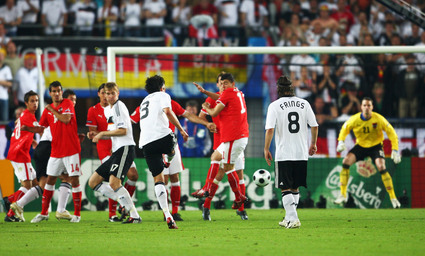 1. Germany are through after their scare but they don’t look particularly special. Only a moment of quality from Michael Ballack saw them through without a tense finale.
2. Mario Gomez is hopeless. How did he manage to miss a tap-in from six yards and then make no attempt to follow up with a header? We predicted after the Croatia game that Marcell Jansen would be dropped, and I reckon Gomez may now be ‘rested’ for the quarter final.
3. Emmanuel Pogatetz’s Mad Dog nickname is a little more complicated than we thought. We thought it was just because he was crazy, but apparently it’s because he eats footballs.

4. Austria didn’t deserve the petition to throw them out of the competition. They are bad but not that bad.
5. Football is a joke. What is the world coming to when two managers can’t have a pitchside barney without getting sent to the stands? Joachim Loew and Josef Hickersberger’s dispute was probably the most entertaining incident of the first-half.