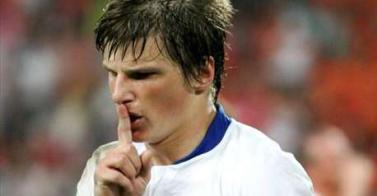 1. Guus Hiddink is a genius. What a coach – you get the impression he could take Andorra or even Wales to the semi-finals of a major competition.
2. Andrei Arshavin is a genius. I could watch this baby-faced assassin all day long. Every time he touches the ball you expect something to happen, and not because he can dribble round 11 players by himself. His passing and vision is something else. Somebody in the Premier League sign him before he gets any older.
3. Russia deserved to go through. Holland did not produce the exciting attacking football they showed in the group stage and were totally outplayed.

4. It could have been very different if the referee had (wrongly) sent-off Denis Kolodin. The centre-back barely touched Wesley Sneijder when Lubos Michel was desperate to show him a second yellow card. He was only reprieved because the assistant referee (again, wrongly) said the ball had gone out of play for a goal kick.
5. This is the tournament of the underdog (or else, all the top teams will be knocked out leaving it on a plate for Germany!).