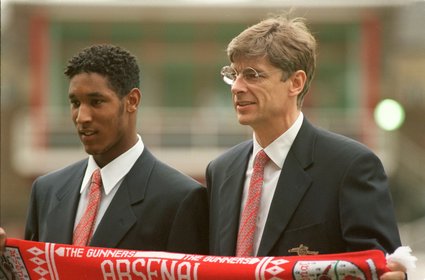 1. Nicolas Anelka
The man who is nicknamed Le Sulk is our inevitable number one. The original master of the enforced transfer saga that we have heard so much about this summer with Robbie Keane, Gareth Barry, Dimitar Berbatov etc. This guy has made a career out of it, playing for nine clubs and rarely moving on without a fall-out of some description.
2. Thierry Henry
Received a huge bonus for leading Arsenal in their first season at the Emirates, which basically amounted to Â£5 million for standing with his hands on his hips moaning at his inferior team-mates. Moved on with a grey cloud over his head for a miserable first season in Spain with Barcelona.
3. Dimitar Berbatov
The moody Bulgarian is cutting a very Anelka-esque figure at the moment, and has been for some time now. Juande Ramos has openly criticised Berbatov for his lack of focus and negative influence on the dressing room as he attempts to force his move to Manchester United through.

4. Pierre Van Hooijdonk
If you name your child Petrus Ferdinandus Johannes Stevenson van Hooijdonk there is always the chance the kid is going to have some issues, and so it proved. P.F.J.S.v.H was not to happy with the lack of signings being made by Nottingham Forest following their promotion to the Premier League in 1998, so much so that he requested a transfer at the start of the season. When this request was turned down, he went on strike and trained with former club NEC Breda until November. He eventually left at the end of the season with Forest relegated.
5. Ashley Cole
Sulked his way from Arsenal to Chelsea. Released a book about the hole episode which might as well have been called My Sulk Relived. Sulking must be very moreish, because Ashley rarely misses an opportunity to play the miserable martyr card these days.
6. Mido
The goal machine of new campaign is a far cry from the sulking mess remembered by Ajax, Roma and most recently Tottenham fans. The Egytian’s sulk routine tends to run along the lines of declare undying love for club, score a goal or two, lose form, get injured, get fat(ter), sit on bench, declare wish to leave club and/or wish that you had never joined club.