Summaries from the weekend action 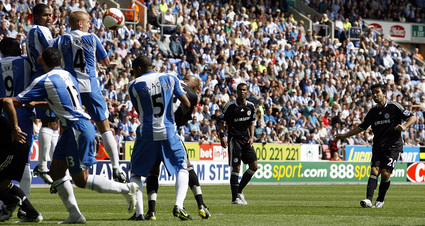 1. The changed man of the week award goes to Arsene Wenger, who after defeat to Fulham proclaimed: “I don’t like excuses.”
More conclusions after the jump…

2. Set-pieces are where it’s at for the smaller teams. Rory Delap’s l-o-n-g throws secured victory for Stoke against Aston Villa, and Fulham’s well-worked corner gave them the winning goal against Arsenal.
3. Tottenham have serious problems, including a big Dracula-shaped one in the stands. Juande Ramos needs to sell Berbatov and stop the rot before their season is ruined.
4. Mido is rejuvenated. Two goals in two games for the big-boned Egyptian. Unfortunately, his stunning strike against Liverpool didn’t earn any points for his team.
5. Djibril Cisse is an excellent signing for Sunderland (but if you make as many signings as Roy Keane you are bound to get a good one every now and again!). A debut goal and I expect many more to follow.
6. Deco is a wonderful addition to the Premier League. What a beautiful goal his free-kick against Wigan was.
7. Elano is another Brazilian-born player currently lighting the league up. His two goals against Manchester City secured victory against West Ham.
8. Alan Curbishley will be out of a job before October. The writing appears to be on the wall I’m afraid, Curbs.
9. Mark Noble is a muppet. He picked up a first-half sending off for two bookable offences, including a stupid handball to pile the pressure on the aforementioned Mr Curbishley.
10. The bookmaker who paid out on Stoke getting relegated after their defeat to Bolton will have a sleepless week.