Who’s the most improved player of all? Find out below…

5. Glen Johnson (Portsmouth)
With the confidence gained from a few good outings in an England shirt (Fabio Capello rates him, it’s clear), Johnson has been the stand-out player in a decidedly lame Portsmouth defence. There is a new composure and maturity to his game. He has even appeared in midfield for Pompey, using his impressive athleticism to get forward and wallop in the odd wonder goal. Can Portsmouth keep him though? With Spurs, Liverpool and Aston Villa reportedly hovering with a summer bid, I doubt it. 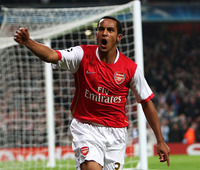 4. Theo Walcott (Arsenal)
He’s barely out his teens, but Walcott is making progress at about the rate I imagined Arsene Wenger had in mind when he signed the 17-year-old prodigy from Southampton. He has learned to harness his pace, and is slowly being taught how to come off his wing and cause serious damage down the middle of the pitch. He has a hell of a lot to learn, as his flawed performance against Chelsea on Sunday showed (lively down the wing, but with crap finishing), but compared with last season, when it seemed Wenger didn’t trust him to play with the big boys, he has taken a significant stride forwardÂ -Â his hat-trick for England in Croatia confirmed this. The man is slowly emerging. 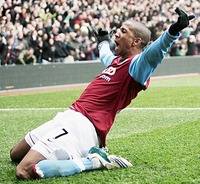 3. Ashley Young (Aston Villa)
The PFA Young Player of the Year had a brilliant, dashing first half of the season, followed by an inevitable dip in form (it’s been the same story for Gabriel Agbonlahor, who is not as talented as Young) -Â but that’s more a consequence of Villa’s relatively small squad than any fault of Young, who is still only 23 and has several more years’ worth of improvement in him. 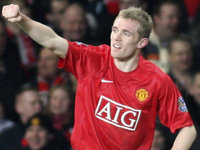 2. Darren Fletcher (Man Utd)
Of course, it’s currently fashionable in pubs and offices up and down the land to say, “That Darren Fletcher, he’s underrated isn’t he?!” He won’t be underrated from now on though -Â everyone is aboard the “We love Fletch!” bandwagon. The tranformation from fans’ figure of fun to admired cult hero is complete for the Scotsman, who is hardly recognisable from the clumsy, victimised Fletcher of 2007/08. Fergie has helped to mould his compatriot into a top-class central midfielder – a superior Nicky Butt, if you like. Shame he won’t get to play in the CL final.

1. Stephen Ireland (Man City)
All hail the man who should have won the PFA Young Player in the Year award this season. Ireland has been immense in 08/09, City’s best player without doubt. Shame some of his more illustrious team-mates haven’t always pulled their weight (yes Robinho, that’s you), but Ireland has never stopped running. It’s wrong to compare him to compatriot Roy Keane, as they are different types of player (Ireland is more inventive, Keane was more destructive), but it doesn’t seem odd to mention them in the same breath. And you wouldn’t have said that last season.