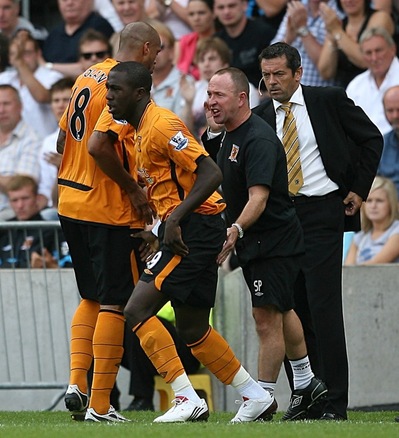 1. “One 100% heterosexual ass-tap, administered by Steve Parkin (Hull City’s first-team coach), propelled Jozy Altidore into the Premier League arena for the first time. That’s how we do things in England…” [@ BigSoccer]

2. Everything you wanted to know about C-Ron’s €12,000-a-month home in Madrid. [@ The Spoiler]
3. Steven Gerrard does the robot. [@ Dirty Tackle]
4. Also on the subject of Stevie G, he faces a civil suit over that bar brawl. [@ Guardian]
5. Controversial radio jock Steven Cohen shuts down his World Soccer Daily show after threats to his family and friends. [@ BigSoccer]
6. Robbie Keane: good with his feet, not so good with his hands. [@ Off the Post]
7. Man City sign Sylvinho as cover for Wayne Bridge. Yes, that Sylvinho. [@ Bitter and Blue]
8. Fulham confirm signing of West Brom skipper Jonathan Greening, on loan deal until end of season. [@ Goal]
9. Bayern Munich get off to the opposite of a flier, disgruntled fans send open letter to the club. [@ The Offside]
10. Dutch version of Esquire magazine names its most stylish footballer. I’ve never heard of him, but he wears a ruffle well. [@ Kickette]