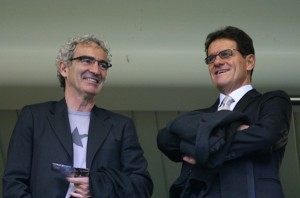 1. France coach Raymond Domenech brands Republic of Ireland “a sort of England B side”, the cheeky Gallic scamp. G-Trap will love that – it’s brilliant motivation for his players. And I won’t lower myself to grading Domenech’s coaching skills, but I will say he’d rank lower than a B. [World Cup Blog]

3. Martin Petrov and the 10 football sinners who got forgiven. [Mirror]

5. Wayne Rooney’s face in a tree. Yes, you read that correctly. [The Run of Play]

6. Italian banner of the season goes to a bunch of drunks. [The Spoiler]

9. Ten of the most memorable ‘soccer’ games at  NY’s Giants Stadium. [NY Times]

10. Was Arry Redknapp right to give Jermain Defoe a dressing down in front of his Spurs team-mates after being sent off against Pompey on Saturday? [White Hart Pain]