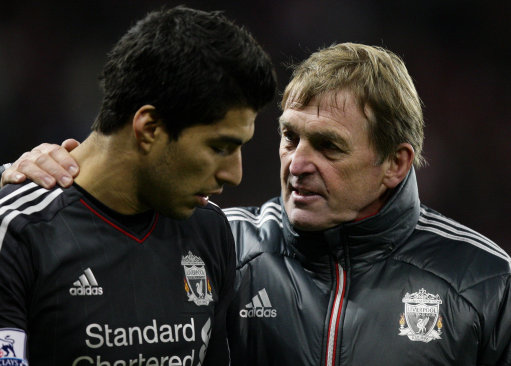 While UEFA’s decision to reduce Wayne Rooney’s ban to two matches for next summer’s EURO 2012 finals has been generally welcomed by England fans, Liverpool’s Scottish boss Kenny Dalglish has a slightly different take on the story.

At his weekly press conference, the Anfield legend questioned The FA’s decision to appeal the original ban, saying: “I find it a bit strange the FA are supposed to be setting an example for things yet they appeal against Wayne Rooney’s ban. I don’t think it’s a good example to set.”

Dalglish then turned his attention to The FA’s handling of the Luis Suarez alleged racism issue.

“The fact it has taken nine weeks to get a decision on one of the other charges is a bit of a joke as well,” said the Scot. “I don’t think that has helped as well. The circus which is around about him has been caused mainly by that.”

At the press conference, Liverpool somewhat bizarrely had set up a TV screen which showed the journalists present video footage of Suarez being fouled by Fulham players in Monday night’s game, in order to provide some background to the Uruguayan’s now infamous hand gesture, which has seen the striker charged by The FA.

“The people at Liverpool and anyone who has any leaning to the club – be it staff, players, supporters – they will stand by him and they know what the truth is, ” said Dalglish, “Anyone wants to see the truth from the other night it is on the screen.”

Move over AVB and Chelsea, you’ve another rival for the title of most persecuted club of the season.