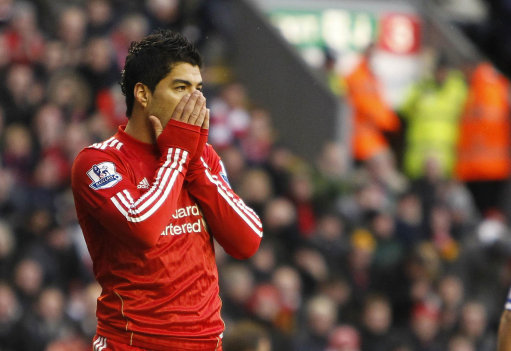 Once again, the giant globe-spanning Illuminati conspiracy established to keep Liverpool from ‘having their year’ has come into effect and has demanded that the FA ban the club’s most effective player this season for the next eight games and fined a week’s wages just for openly and admittedly calling a black man a ‘negro’ a few times during a game of football.

Yesterday evening, shortly after Luis Suarez was made a pariah of by the powers that be, Liverpool released the following club statement:

“LFC considers racism in any form to be unacceptable – without compromise. It is our strong held belief, having gone over the facts of the case, that Luis Suarez did not commit any racist act.

“It is also our opinion that the accusation by [Evra] was not credible – certainly no more credible than his prior unfounded accusations. It is key to note that Patrice Evra himself in his written statement in this case said ‘I don’t think that Luis Suarez is racist’. The FA in their opening remarks accepted that Luis Suarez was not racist.

“It appears to us that the FA were determined to bring charges against Luis Suarez, even before interviewing him at the beginning of November. Nothing we have heard in the course of the hearing has changed our view that Luis Suarez is innocent of the charges brought against him and we will provide Luis with whatever support he now needs to clear his name.

“We would also like to know when the FA intend to charge Patrice Evra with making abusive remarks to an opponent after he admitted himself in his evidence to insulting Luis Suarez in Spanish in the most objectionable of terms. Luis, to his credit, actually told the FA he had not heard the insult.”

So what should have been yet another convenient platform to address the ongoing and insiduous issue of racism in the game has instantly been turned into a childish bout of pissy tribalism. Well done, hats off. No-one does ‘hair-trigger persecution complex’ quite like Liverpool Football Club. It’s always someone else’s fault isn’t it? Though I would say that, I’m just part of the London media bias machine.

Objective observers could feasibly argue that, given his generally abhorrent conduct on the pitch as a matter of course, Luis Suarez was long-overdue another lengthy ban, but that’s probably by the by.