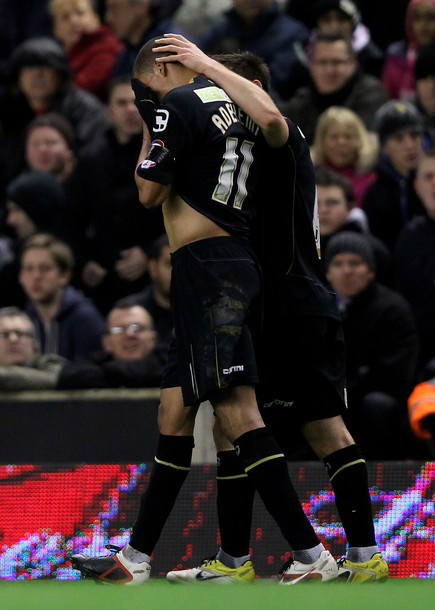 Oldham’s Tom Adeyemi, a 20-year old lad playing in one of the most prevalent games of his professional career to date, was reduced to tears  – I’ll say that again, reduced to tears at Anfield last night by a small group of Liverpool-aligned flesh-wastes in the Kop and their toxic, racist oral excreta.

I must reiterate that it was only a few shit-grinned fans that actually hurled the abuse that reduced Adeyemi to tears, but the fact that the majority of the home crowd began singing a Luis Suarez chant and booing the young Oldham right-back was more than indicative of a club-wide hive-mind. It would be wrong to over-generalise and blame every Liverpool fan present, but there were – at the very least – a few thousand voices barracking and taunting Adeyemi for the last few minutes, and that’s a few thousand too many.

I don’t wish to dwell too long on the subject as, frankly, it’s not worth my chagrin, but it seems to me that, as no-one was decisively and unerringly admonished and no hard line was taken in the aftermath of the Suarez/Evra shitfest, Liverpool Football Club yet again managed to pervade an air of persecution and, ergo, the general feeling that Suarez’s conduct was ‘not that bad’.

Speaking theoretically, had the club taken a no-nonsense stance the very thought of hurling racist abuse, especially in this kind of climate, would hopefully have been stymied.

Alas, they didn’t and, as a direct result, the tiny pocket of Liverpool fans that directly abused Adeyemi were acting under a misguided perception of relative brevity toward the subject of racism, directly bought about by the club’s questionable gestures of support during, their reaction to and their continued stance over the Suarez fiasco. This is what happens when you defend the indefensible.

The people that are willing to do this kind of thing in a public forum obviously need to be led. Liverpool’s pigeon-toed ‘sorry for ourselves’ routine created a bubble and allowed for dissension amid their ranks. Intolerant discord of the worst kind.

As for the rest of the crowd that reacted in unison as they did because – and believe me, I’ve racked my ever-numbing brainlump for a less derisive conclusion – they are all insular, conceited, reactionary arseholes. That or they’re completely f**king moronic.

Hands up, that’s the best I’ve got. How else can you make sense of what happened at Anfield last night?