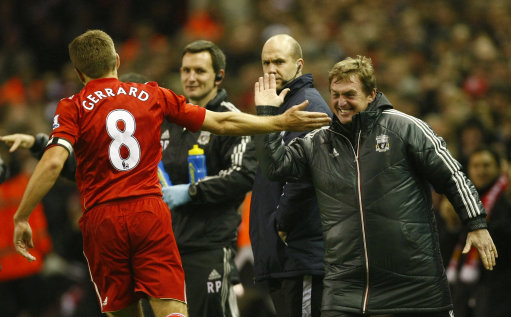 Fresh from signing a contract extension with his one and only club, Liverpool captain Steven Gerrard has found himself on the end of some lovely praise from his manager.

Kenny Dalglish has claimed that the 31-year-old Gerrard, recently returned from a long-term injury, could play on for another seven years and may go on to be considered the greatest player ever to wear a Liverpool shirt.

“Giggs is 38, isn’t he?, ” said the Liverpool boss when quizzed about how long Gerrard can keep playing. “That’s seven years down the line – that’s a long time to predict – but if he’s fit there’s no reason why not.”

“I’ve not got a crystal ball. I’m just delighted he’s done what he’s done and we have got him here.”

“I wouldn’t disagree he has certainly made a huge contribution to the club but he wouldn’t be far away from being mentioned as the best player,” he continued. “It is not just what he does in and around the first team it is what he stands for the football club as well – which is more important.”

“His standing within the community is fantastic and the way he does other work happily is a great testimony to himself as well.”

Gerrard’s return to action will be vital to the Reds’ battle for a Champions League place. With Lucas Leiva out for the season and Jordan Henderson and Stewart Downing both failing to blossom at Anfield, Gerrard’s drive and creativity from midfield will be all-important.

As for Gerrard on possibly being Liverpool’s best-ever player. Does he really rank above the likes of Dalglish, Ian Rush, Kevin Keegan, Emlyn Hughes, Billy Liddell and Istvan Kozma*?

* That last name was added as a purely ironic device and should not be taken seriously. This notice comes after the gross misunderstanding on the part of many, many readers over my, again, ironic description of the Liverpool fans abusing Samir Nasri as having “thick Scouse accents”. Thank you for reading.