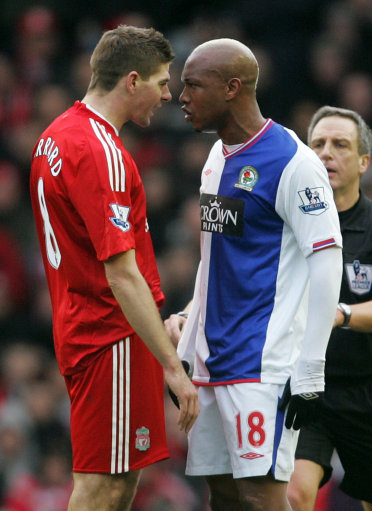 Never one to win friends and influence people, eternal bad-boy El Hadji-Diouf has been at it again, this time taking aim and firing both barrels at former teammate Steven Gerrard.

In an interview with L’Equipe, the Leeds forward discusses his career and his bad-boy image, but it’s his quotes on Gerrard which are sure to irk Reds fans as well as the man himself, of course. In discussing the criticism levelled at Diouf in Gerrard’s autobiography, the Senegalese ‘sewer rat’ says:

“Steven Gerrard’s words? It is jealousy. I was the most important man at that time and I had everyone at my feet.  I was committed to the Senegal national team. I took them to the quarter finals of the 2002 World Cup.

“I was in the 100 best players of the century list by Pele not him.  I respect him as a footballer, but there is no one more selfish than he is. He prefers that Liverpool loses and he scores.

“He doesn’t care about anyone. I’ve talked to Liverpool greats and no one can stand him.”

“No one can stand him?” Bloody hell! Don’t hold back there, Monsieur Diouf! It’s all a bit rich coming from a man who drives around in a four-wheel drive Ferrero Roche.

We’d also just like to point out that, while it’s true that Diouf was included in Pele’s little list, the Brazilian legend also named Nicky Butt as his player of the tournament at the 2002 World Cup. Draw your own conclusions there.

So Liverpool fans, is there a grain of truth in Diouf’s critique of Stevie G, or is it just sour grapes?