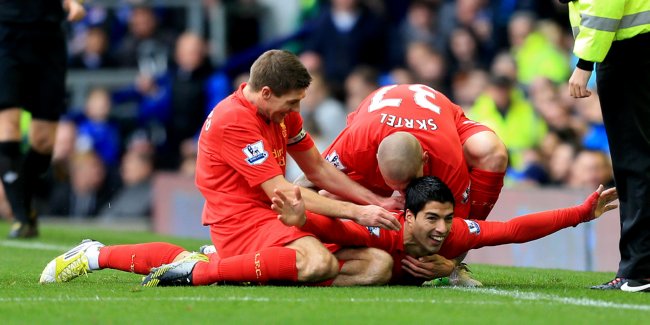 Luis Suarez was once again both the hero and the pantomime villain of an exciting Merseysdie derby at Goodison. From start to finish, the striker was central to the clash, with his shot on 14 minutes, deflecting off Leighton Baines to open the scoring. The Uruguayan chose to celebrate that goal by producing, in true Jurgen Klinnsmann style, a mock dive right in front of Everton boss, David Moyes, who was less than pleased. Somewhat ironically, Everton’s very own Phil Neville was himself booked for diving during the course of the game.

Suarez then doubled the Reds’ advantage on 20 minutes, courtesy of a fine header as the visitors stunned Goodison Park. However, the Toffees struck back almost immediately through Leon Osman while Steve Naismith levelled the scores before half-time.

After the break, the home side pushed for the winner, although at the other end of the pitch, fleet-footed winger Raheem Sterling was a threat in a more central attacking role. Then, late on, Suarez was once again involved in some drama, when he prodded the ball in after a Steven Gerrard free-kick, only for the lino to erroneously flag for offside. And that was that.