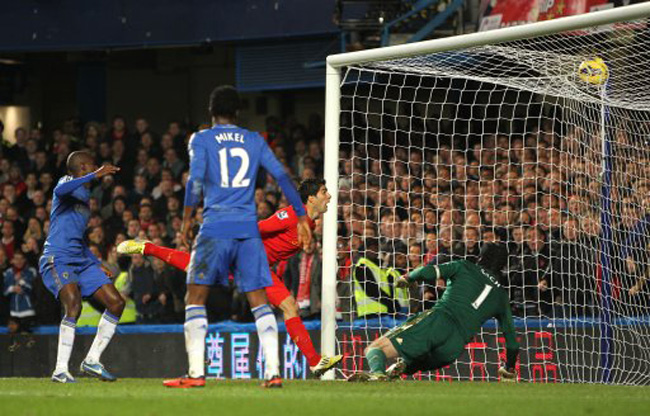 Those loveable rogues/poor little victims/racist scum (delete according to your club affiliation) John Terry and Luis Suarez took centre stage at Stamford Bridge on Sunday, with the two controversial stars both getting on the scoresheet in what was a rather poor game overall.

The home side enjoyed much more of the ball but failed to hurt the Reds too often although it was JT, back from his four-match suspension, who opened the scoring on 20 minutes, heading home after some poor Liverpool defending.

Oscar, Juan Mata and Fernando Torres all had chances to increase the Blues’ lead while before the end of the first-half, goal-hero Terry had to be stretchered off with what looked like a serious ligament injury after Suarez fell onto the defender’s leg, which buckled under the weight of the player.

After the break, the home side continued to attack but their failure to make the most of their dominance would come back to haunt them when, with 17 minutes to go, Suarez headed home from close-range to level the scores.

Both sides pressed for the winner but the game ultimately ended all square. The result sees the Blues fail to regain the top spot from Manchester United while Liverpool find themselves in 13th.

Oh, and one final point, apart from Lionel Messi and Cristiano Ronaldo, is there a better player around right now than Luis Suarez?