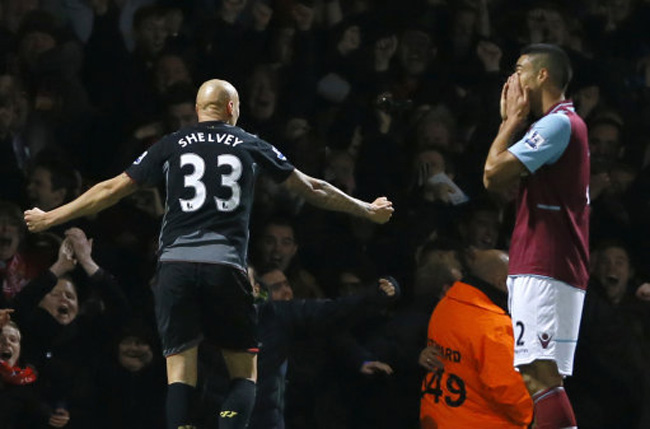 Full-back Johnson opened the scoring on 11 minutes but by half-time the Hammers were in front, courtesy of a penalty from Mark Noble and an own-goal from Steven Gerrard, who headed the ball (rather deftly actually) into his own net.

After the break the Hammers pushed for more goals and looked well in control. But then, with 15 minutes to go, sub Joe Cole levelled the score with a fine left-footed finish. And then, just three minutes later, James Collins’ inadvertently deflected a Jordan Henderson cross over the helpless Jussi Jaaskelainen. Interestingly, the Liverpool player who almost got a toe to the cross before Collins did, Jonjo Shelvey, had also been at West Ham as a youth player.

The Reds climb up to 10th, one place above  the Hammers, who will now have to do without the superb Mohamed Diamé for a while after he was injured in the second-half.