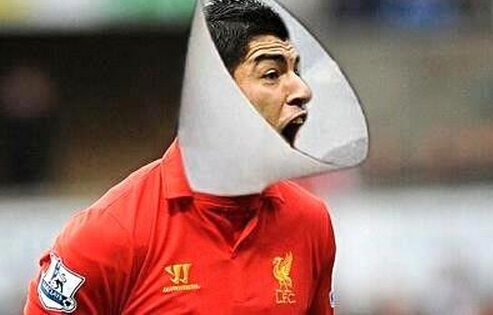 In a truly WTF moment, pantomime villain Luis Suarez lived up to his bad-boy image and then some by blatantly attempting to bite Branislav Ivanovic on the arm.

The Uruguayan even has form for this kind of madness, doing it once before with Ajax, but surely this latest piece of nasty and bizarre behaviour could spell the end of his time with Liverpool.

Still expect some fervent Suarez supporters will claim it was arm to mouth rather than the other way ’round.

However, as mental as the bite was, and by Jove it was, It does seem rather odd how so many potentially career-threatening challenges are forgotten in an instant while something like this will be analysed for weeks to come

As for Suarez himself. He clearly has rather large anger issues which hopefully, for his sake, he’ll get sorted soon. As he is unquestionably one of the most gifted footballers on earth right now.

Oh, and during the 2-2 draw at Anfield, the Uruguayan also managed to cram into the 90 minutes, giving away a penalty for a handball and scoring a 97th minute equaliser. Drama queen indeed.