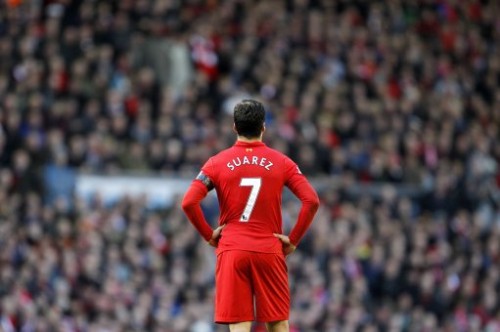 After pleading guilty to a violent conduct charge, Luis Suarez has been given a ten-game ban for biting Branislav Ivanovic at the weekend, which comes into force with immediate effect.

“A three-person Independent Regulatory Commission today upheld The FA’s claim that a suspension of three matches was clearly insufficient and the player will serve a further seven first-team matches in addition to the standard three.”

We don’t have to tell you that this apparently means that a friendly little chew on a buddy’s bicep is roughly a two-game ban worse worse than being found guilty of flinging racist terms about willy nilly in the FA’s big book o’ crimes and punishments.

The FA have fnargled themselves into a “just can’t win” cul-de-sac of precedents with the bans they’ve been doling out in recent years.

While the bite was obviously deplorable, you’ve got to wonder if Suarez is being punished for being Suarez here.