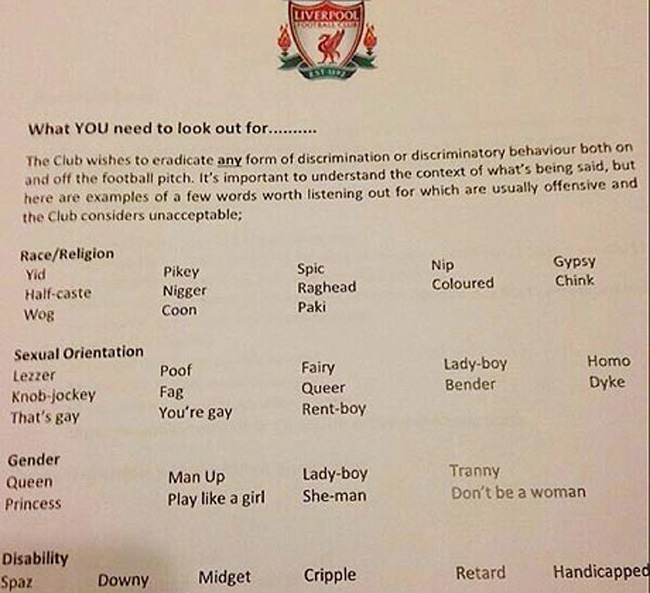 Liverpool have found themselves in the firing line in last year or so over both the apparently racist behaviour of striker Luis Suarez and the club’s public support for their player. However, behind the scenes, the club have been one of the most progressive and active in terms of making their club welcome to all strands of society, whatever their race, religion, gender or sexual preference.

I know a bit about this since I worked for quite some time with anti-homophobia in football organisation The Justin Campaign and their now high-profile Football v Homophobia campaign. In my time working in this field, Liverpool were one of the most receptive league clubs and one of the most eager to help.

Now, the Guardian have released a photo of a list of words and phrases deemed offensive by the club for its staff and it makes for quite an interesting read.

The guidelines have not been given to the players themselves, as they get their directives from the FA, but the staff who have received the guidelines are expected to enforce them on match-days at Anfield.

This list, particularly the inclusion of phrases such as ‘man up’ is sure to get a lot of the ‘political correctness gone mad’ crowd into a lather, but in my opinion, it’s about time sexism and misogyny were given the same kind of coverage and treatment as racism and homophobia.

Good on Liverpool, I say!