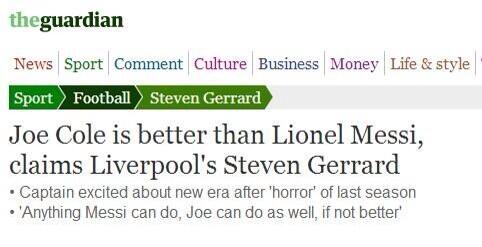 Only four years ago, in an interview with MOTD magazine in 2010, Steven Gerrard claimed that Liverpool’s then new-signing, Joe Cole, was better than a certain Lionel Messi. Stevie G said:

““Messi can do some amazing things, but anything he can do Joe can do as well, if not better. He used to shock us in training by doing footy tricks with a golf ball that most players can’t even do with a football. I really fancy Joe for the [player of the year] award this season.”

Alas, it hasn’t quite turned out as well for Aston Villa new-boy Cole as it has for Barca’s all-conquering Argentine megastar, has it? Whatever you do Stevie, don’t become a scout when your playing days are over.