It has emerged that one Liverpool fan was arrested before last night’s 1-0 tonking (if such a thing exists) at the Bernabeu, after a minor disturbance in Madrid’s famous Plaza Mayor several hours before kick-off.

Taking umbrage at Liverpool fans enjoying a bit of a light kickaround around in the square, a couple of police officers attempted to confiscate the offending football.

However, as the coppers closed in an impromptu game of “piggy in the middle” began, with one fan hoofing the ball away and swiftly finding himself being nicked for doing so…

No word on whether or not the fan was released in time for kick-off, though he was probably begging the police to keep him in after seeing Brendan Rodgers’ team sheet.

While we’re on the subject of Plaza Mayor, this little beauty was draped there before the game. 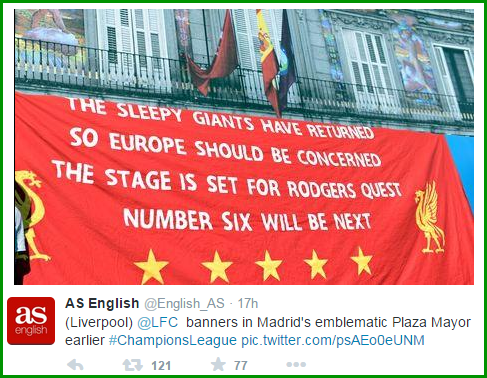