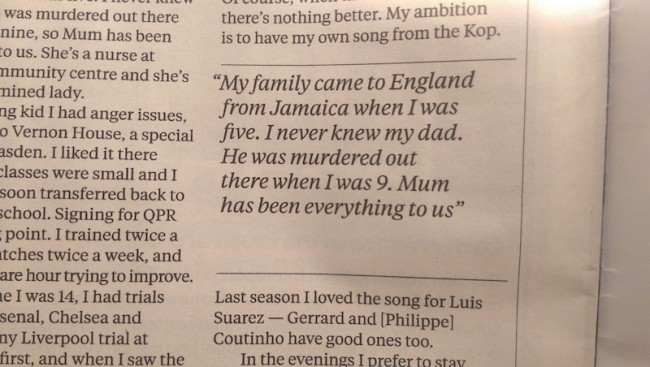 Speaking to the Sunday Times for their Day In The Life magazine feature, Liverpool’s not-in-the-least-bit money-grabbing gilded starlet Raheem Sterling invites the club’s fans to make up a chant for him.

“My ambition is to have my own song from the Kop. Last season I loved the song for Luis Suarez – Steven Gerrard and Philippe Coutinho have good ones too.”

So. What can Liverpool fans come up with – supporters who have endured Sterling telling the BBC he is “flattered” by Arsenal’s interest in him and who has rejected £100,000-a-week to play for the club they love?

What can the lesser breed who merely watch the great and elite at no little cost conjure up to explain Raheem Sterling in rhyme?

And be warned: if the song’s not good enough, the lyrics and melody not to Raheem’s liking, he reserves the right to leave for a better chant elsewhere…