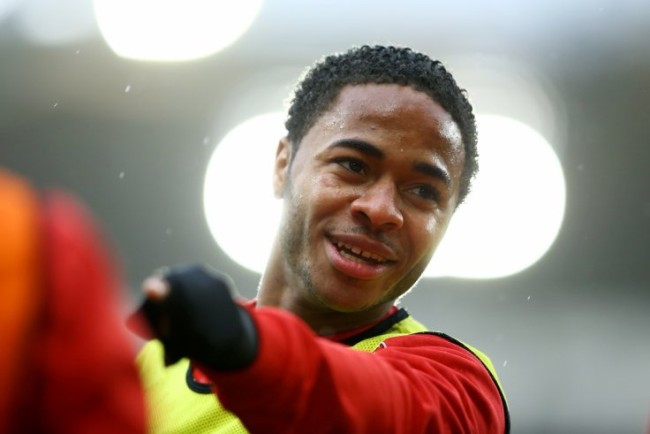 The Daily Raheem: A look at the Liverpool player in the tabloid press…

Writing in The Sun, Rod Liddle says the Kop are “fed up with Sterling”, who “represents an awful lot of what is wrong with modern football”.

Sterling is guilty of “mind-bending greed”. Liverpool fans are forced to endure the player who thinks he’s outgrown them kissing the badge in a “sickening display of conterfeit loyalty”.

Liddle then notes the shisha pipe smoking and nitrous oxide inhaling, before turning to Sterling’s reported inability to recall when the son he sired at 17 was born.

The greed and the badge kissing are parts of the modern game. They are awful and as unwelcome as jester hats, talk of the “football family” and the PA announcer who drowns out the singing to scream “Make Some Noise!”. But is it fair to blame football for Sterling’s parenting or recreational use of legal drugs?

Sterling is “allowed to get away with doing whatever he likes because that’s what Premier League footballers do”.

Liddle concedes that there are “a few who lead decent lives”. A few? Liverpool’s squad consists of 41-players. Aside from Sterling, the only player to attract non-
footballing headlines is Mario Balotelli, who has updated the fireworks code (keep away from bathroom towels), posted iffy messages on social media and been the target of rabid racism.

Liddle is the writer who “cut short his honeymoon to rush home to his young mistress“. How’s that for a conterfeit show of loyalty. He also wrote an article that could have scuppered the trial of Stephen Lawrence’s murderers Gary Dobson and David Norris.

The thing is that just like Sterling, Liddle’s job is to entertain to a deadline. He does a good job of it. He’s not as entertaining as Raheem Sterling, bringing less delight to the masses, but Liddle is no more a role model to the proles than any footballer is.

But whereas Liddle is a gun for hire, Sterling is, as The Sun’s Stephen Howard told us yesterday, “a role model for impressionable Liverpool and England fans”. Football fans are stupid and copy everything the players do being the well-trodden gist.

The ironic thing is that these Sun writers are guilty of the same kind of snobby outloook that the Government and broadshseets use to portray all tabloid journalists as a “different breed” of immoral scum.

Ex-Labour MP Chris Mullin commented on “the mob of shaven-headed tabloid readers”. Tony Blair told us that tabloid readers are too thick to realise that what they read is not the true word but a sensationalist, interesting version of the facts. He said the Sun et al offered these mouth breathers “no objective yardstick [for viewers or readers] to measure what they are being told”.

Today’s football fans are similar fools who will race riot unless Luis Suarez is banned, rape women if depraved Ched Evans gets a job in football and forget their children’s birthdays because, you know, that’s what Raheem Sterling does….