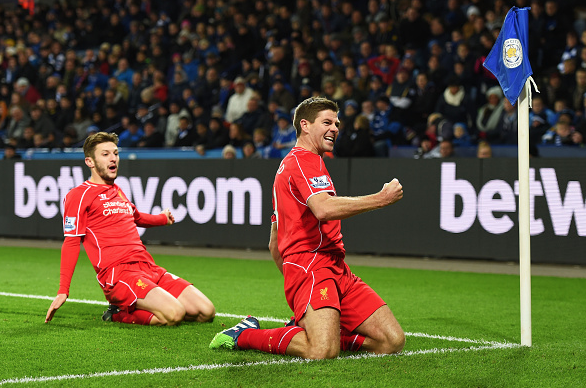 He’s hardly set Anfield alight, making 22 starts and scoring 6 goals in an injury-hit debut season – a season the man himself has described as “very average”.

But how much have his performances been shaped by the glowering presence of Steven Gerrard?

He’s been talking about the future in a Guardian article entitled “Adam Lallana calls for leaders to emerge from Steven Gerrard’s shadow”:

“There shouldn’t be any responsibility on anyone to solely fill Steven’s boots. It is going to have to be a contribution from the team.

“If everyone gives two, three per cent extra then hopefully we can half-fill that spot. It is going to be tough but we will be working hard.”

Doesn’t everyone give 100% already? When he arrived Lallana opined:

“I hope I can add something to the team and hopefully we can win trophies. That’s why I’m here – for success.”

Is the assumption that Liverpool rely on Gerrard’s brilliance and energy to carry the team? Lallana claims to be one of many leaders at Liverpool. But is he right?

On the Liverpool FC website, Lallana is full of praise for Gerrard:

“He’s a player I’ve looked up to my whole life. Although I’ve only played a season with him, it has meant everything to me.

“He’s a massive leader and he’s got that aura around him. When he walks into a room, he doesn’t need to say anything – he has got that presence.

Bit mawkish, isn’t it. If just playing in the same team as Gerrard means everything, how can you be trying to surpass him, demanding the ball comes your way and not to the waning star, giving your teammates an option?

It would be unrealistic to expect Lallana to embody Liverpool’s pursuit of excellence, as Gerrard has.

The club has no replacement for “Huyton’s Hero”, a local boy blessed with a never-say-die attitude to augment the sublime skills, who flirted with Chelsea but decided that he was Liverpool through and through.

But if ever there was a sign of how Liverpool have shrunk as a force it is surely an England international for whom success is no longer weighed in silver, but in how many minutes he shared the turf with Steven Gerrard.