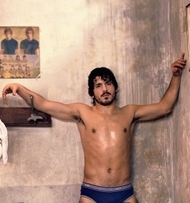 Ahead of this month’s Champions League final, Milan dynamo Rino Gattuso has taken a pop at Liverpool’s long-ball dinosaurs: ‘All Liverpool try to do is defend together, with everybody behind the ball and just one strikerâ€¦ All they do is play long balls â€” every ball is a long ball. It is very different to Manchester, who are a real footballing team.’
Hmm, do you think it’s wise to wind up Liverpool like that? Remember what happened when Milan got under the skin of Steven Gerrard and co at half-time in 2005’s pulsating final. Stevie G wrote in his autobiography: ‘Gattuso just plays for the fans â€” theatrical and emotional. He was also the one Milan player who had a smirk on his face leaving the pitch at half-time. I saw it. F*** you.’

And that’s not all Steve G has to say about Gattuso:
‘I wasnâ€™t worried about Gattuso before the game [the 2005 CL final], during the game, or after.
‘People rate the Italian for some reason. For me, he is all mouth. He looks aggressive, but he is as scary as a kitten.
‘I swear I wouldnâ€™t mind playing against Gattuso every week. He doesnâ€™t hurt you. I have never seen Gattuso play a killer ball.’
Harsh and unfair criticism by Gerrard – and who’s being disrespectful there, if not the England man? Both Gattuso and Gerrard are great players, but completely different types of midfielder – Gerrard roves with attacking intent, Gattuso is simply there to destroy the opposition, mentally and physically. If you were manager, which would you prefer in your starting XI?