With Liverpool about to swan off to Australia for a pre-season jolly, club sponsors Subway eagerly pumped out a promotional competition to hype the Reds’ arrival down under.

Indeed, the US-based sarnie-mongers announced a contest for one lucky fan to win VIP tickets to the upcoming friendly against Adelaide United over on their official Facebook page.

As well as all the T’s & C’s, the shiny competition promo also featured pictures of all your favourite Liverpool stars… 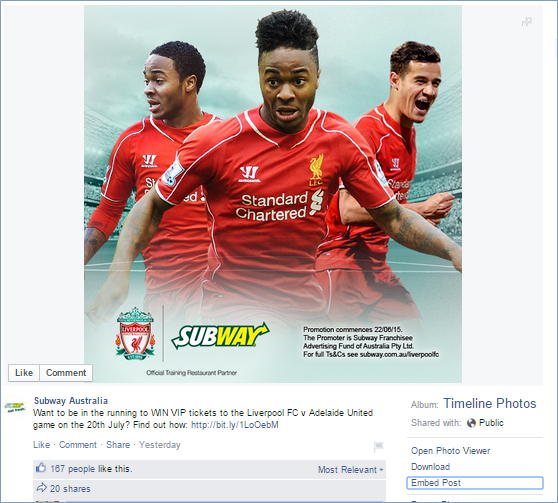 Oops. Looks like Subway have included both models of the Raheem Sterling collectable figurine there – the ‘standard’ version and the much rarer ‘Little Richard bouffant’ version (complete with camp-as-Christmas running action!).

Suppose at the very least it solves Liverpool’s Sterling conundrum in one fell swoop. Just sell one of them on for £50million and keep the other. Sorted.

The post has since been deleted after Liverpool fans had their fun in the comments section – generally along the “you’re shite and you’re sandwiches are f**king shite too” line.