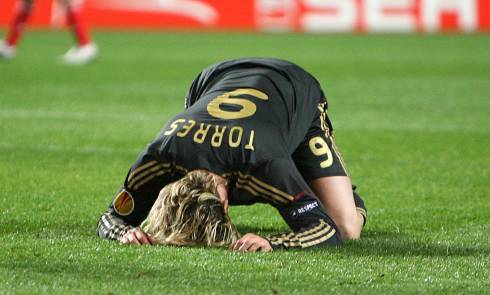 “Banging your head against some mad bugger’s wall”

Liverpool striker Fernando Torres has offered his frank views on the club’s underachievement this season, admitting that the raft of player departures last summer ‘messed everything up’.

The Spanish talisman singled out the sales of Xabi Alonso, Alvaro Arbeloa (both flogged to Real Madrid) and Sami Hyypia (sold to Bayer Leverkusen) as the key losses to a Liverpool squad that has struggled for consistency this season, as ‘Pool now find themselves out of the running in all competitions bar the Europa League.

Torres has been quoted in various rags this morning as saying;

“There have been various important factors, like being so far behind the top teams so quickly. That killed us psychologically. After that, injuries hit us hard and we have suffered a lot because of them.

But after a good season last year, we needed certain reinforcements and we needed to keep the squad we had together. But circumstances dictated that we had to sell players and so everything got messed up.

The sales of Arbeloa, Hyypia and Alonso were important losses. Alvaro always did a vital job for us, always played to a high level, and his flexibility was a huge bonus.

And Xabi? Players like him are very rare. He was the team’s engine, and you know that when you change an engine, it takes time to work again.”

Say what you want about him, this lad’s no duck egg.