West Ham’s unpredictable start to the new season continued at Anfield on Saturday afternoon, with Slaven Bilic’s side enjoying a shock 3-0 win against the Reds, a victory which was the east Londoners first in the league away to Liverpool since 1963. 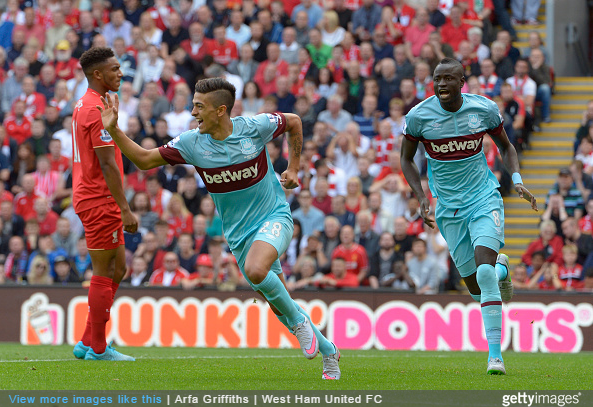 There were only three minutes on the clock with debutant Manuel Lanzini netted after an Aaron Cresswell centre following a poor clearance from Martin Skrtel.

Things went from bad to worse for the hosts on the half-hour mark, with some more horrible defending., This time it was Dejan Lovren’s turn to make a hash of a clearance, leaving the impressive Lanzini to set up Mark Noble for the second goal of the game.

After the break, Liverpool’s hopes of getting back into the game were dealt a heavy blow when Philippe Coutinho was sent-off for a second yellow after a poor challenge on Dmitri Payet.

Big-money summer-signing Roberto Firminho failed to impose himself on the game and was hauled off on 60 minutes, with the Reds struggling to provide any kind of attacking threat.

On 78 minutes, Nobel saw red for a lunge on Danny Ings, although the whistle had already gone for a foul on Noble himself.

However, the Hammers weren’t done yet, with Diafra Sakho scoring at the death after yet more poor Liverpool defending.

The result sees the Reds lose for the first time this season, with Rodgers sure to be concerned by both his side’s dismal defending and blunt-edge up front. As for the Hammers, their rollercoaster ride of a season continues.