After joining up late with his team-mates due to the birth of his son, Norwich defender Russell Martin celebrated in style by netting the goal which secured a share of the spoils for Norwich City at Anfield on Sunday. The game also saw the return of Daniel Sturridge to the Liverpool ranks after five months on the sidelines while Danny Ings netted his first goal for the Reds. 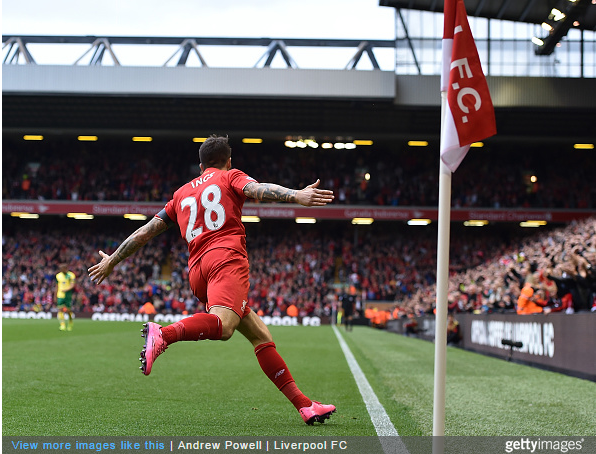 Sturridge started in tandem with Christian Benteke in attack for the Reds.

However, neither side created much in the way of excitement in a dull first period.

Brendan Rodgers sent on Danny Ings for the second-half, with Benteke suffering from a tight hamstring. And it didn’t take long for former Burnley man Ings to net his first goal for the Reds, with the striker firing home just three minutes after coming off the bench.

Ings energised the Reds’ attack, as the home side looked to add to their lead. However, it was the Canaries who would score the second and final goal of the game, with new-dad Martin flicking a superb effort over Simon Mignolet after the Reds’ glovesman failed to clear a corner.

Mignolet was called into action again soon after the goal, with the Belgian this time keeping out Matt Jarvis’ effort with ha fine fingertip save.

Up the other end of the pitch, the hosts continued to threaten the Norwich goal as they searched for the lead again. However, Philippe Coutinho failed to make the most of a one-on-one with ‘keeper John Ruddy while Ings couldn’t keep control of the ball after rounding the Canaries’ ‘keeper.

Despite the pressure, Alex Neil’s side held on for a precious and hard-earned point while the Merseysiders’ disappointing start to the season continues.