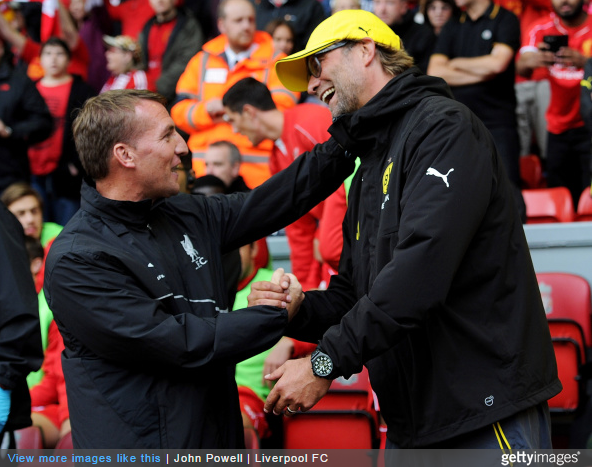 It’s only a matter of time before the official announcement is made anyway, but Sky Germany are reporting that Jurgen Klopp has today agreed a deal to become Liverpool’s new manager.

The Telegraph have picked up the story and embellished it, adding that Klopp will be unveiled by Liverpool at a press conference arranged for Friday morning.

The 48-year-old is boarding a flight from Dortmund to Merseyside this afternoon and is expected at John Lennon in airport in a few hours.

Although an official statement about the former Borussia Dormund’s appointment as Liverpool’s new manager is still to come, it is further confirmation of football’s worst kept secret.

Klopp has informed reporters in Germany he has already agreed terms – the three year contract widely reported earlier this week.

Klopp will formally put pen to paper on all aspect of the deal later, with the formal announcement planned for tonight.

The Tele also claim to be privy to the coaching team that Klopp is piecing together around him, with Gary McAllister, Sean O’Driscoll and ‘head of opposition analysis’ Chris Davies apparently all let go after being informed they will not be part of the new management set-up.

Klopp’s long-time henchmen Peter Krawietz and Zeljko Buvac will be joining the ex-Dortmund coach at Anfield, though current Liverpool employees Ryland Morgans (head of fitness and conditioning) and former academy coach Pep Lijnders are to be retained.

The times, they are a-changin’.