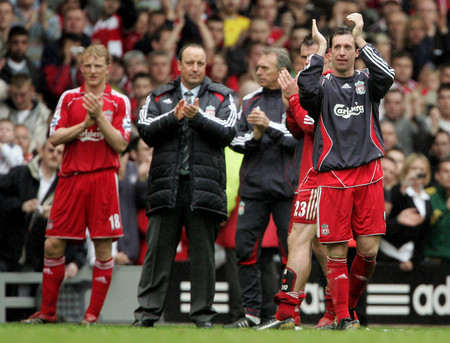 Robbie Fowler applauds the Anfield crowd after making his final appearance for Liverpool, against Charlton (the game ended 2-2) yesterday. The man known on the Kop as ‘God’ didn’t mark his swansong with a goal but fans gave him a standing ovation when he was substituted.
Fowler is truly one of the great strikers of the Premiership era, although there will always be a nagging feeling that he didn’t quite do justice to his wonderful talent. [Photo: Getty Images]
Click below to watch a Koppite’s view of Fowler’s farewellâ€¦