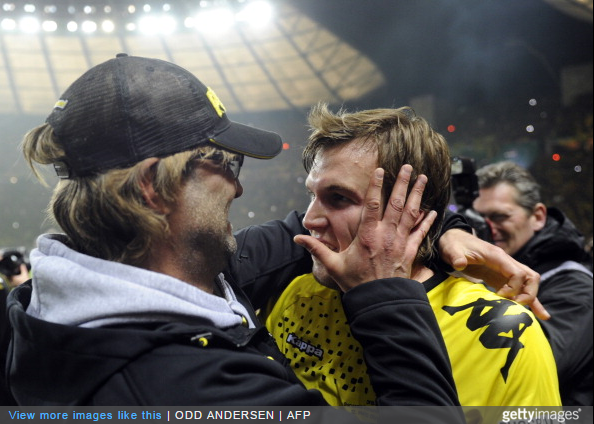 With Jurgen Klopp’s first game as Liverpool manager coming later today, one of his ex-Dortmund charges has warned the Reds’ players to prepare themselves for the German coach’s brand of uniquely aggressive affection.

Speaking from experience, Grosskreutz, who was part of Klopp’s back-to-back title-winning Dortmund squad, has informed his Liverpudlian counterparts that while Klopp will ‘Klopp slap’ them about a bit, it’s absolutely nothing to worry about; it’s just his way of showing that he cares.

Writing in an open letter to Liverpool fans in the Daily Mail, Grosskreutz said:

Jurgen Klopp may bump heads with his players on Saturday, he may even slap them but one message will be clear: it is not about you, it is about the team.

Klopp is an emotional guy. You have seen on television how he is on the touchline living every kick? Let me tell you he is equally animated in the dressing room. He is colourful, angry, emotional but he definitely has a plan. He has a clear strategy, he combines brains and guts.

Before every game, he made sure the atmosphere inside the dressing room was always highly charged. He would speak to each player individually, pumping them up, telling them what he wanted and then he would address us all as a group.

Lots of things went on with varying degrees of roughness; you could compare it maybe to what you see in American football or the rugby world cup, he’d bang heads with players, slap them. It was not in an overly aggressive way but in a way buddies would motivate each other.

He wanted to get inside our heads so that he knew we were going out to win. He wants everyone to put their body on the line and that will be his mantra: One for all and all for one.

Any Liverpool individual who doesn’t buy into that will soon find himself out of the group.