Liverpool produced an outstanding performance away at Manchester City in Saturday’s late game, with Jurgen Klopp’s ‘rock’n’roll football’ ripping through the Etihad to the tune of an incredible 4-1 scoreline. 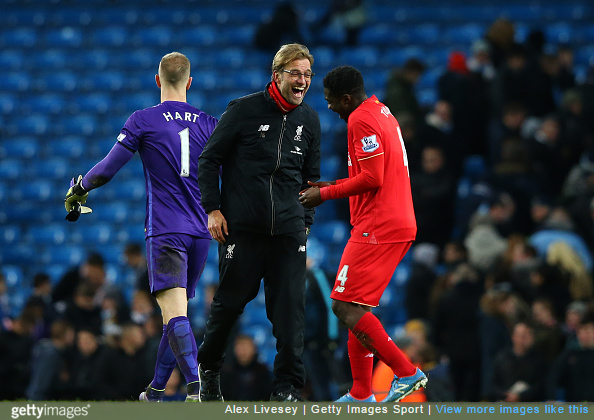 The Reds were sharp from the first whistle and found themselves ahead after just seven minutes, when Eliaquim Mangala awkwardly put through his own net. Indeed, the absence of captain Vincent Kompany left the Citizens disorganised at the back, with Liverpool’s attacking trio of Roberto Firmino, Philippe Coutinho and Adam Lallana scintillating throughout.

The rampant visitors doubled their lead on 23 minutes, with the outstanding Coutinho netting from close-range after more poor defending from the hosts allowed Firmino to cross into the box. The Citizens were reeling and Klopp’s charges delivered a knockout blow on 32 minutes when Firmino scored after some superb interplay from Emre Can and Coutinho.

Just before the break, Sergio Aguero got one back for the shellshocked hosts, courtesy of an outstanding curling effort. However, that delicious strike failed to kickstart a comeback for the Citizens. Indeed, it was the Reds who score the fifth and final goal of the game on 82 minutes, with defender Martin Skrtel lashing home following a corner.

Much of the pre-match interest had focused on Raheem Sterling first meeting with his former club. However the City winger, like most of his teammates, simply couldn’t live with Liverpool’s all-action, incisive display. While the result more than hints at a very positive future for Klopp and co., for the Citizens, who now find themselves two points off the top, the dismal defending on display at the Etihad will have given Manuel Pellegrini and his coaching staff much to ponder.