Liverpool became the second English side to book their place in the last 32 of the Europa League on Thursday night, following Tottenham into the knockout stages courtesy of a 2-1 comeback win against Bordeaux. 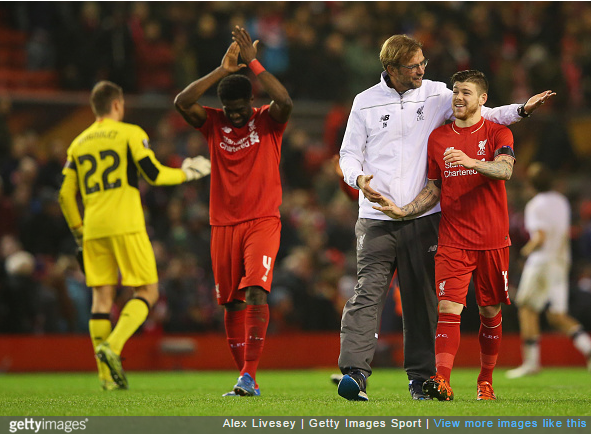 Prior to the game, the hosts were rocked by the news that Daniel Sturridge had suffered yet another injury. However, striker Christian Benteke lead the line superbly for the Reds throughout. However, just after the half-hour mark, it was Bordeaux who would open the scoring, courtesy of a superb free-kick from Henri Saivet. That goal had come after ‘keeper Simon Mignolet was rightly penalised for holding onto the ball for too long by referee Alon Yefet.

It only took five minutes for Liverpool to get back on level terms, with James Milner firing home from the penalty spot after Benteke was fouled by Ludovic Sane. Then, on the stroke of half time, Belgian hitman Benteke producing a superb finish from a Nathaniel Clyne pass.

There were no more goals after the break, although Benteke did have a goal disallowed. However, the Reds held on to secure a deserved win which sees them progress into the knockout stages, as the Klopp revolution continues on Merseyside.