Jurgen Klopp’s goal celebrations have been a welcome addition to the Premier League this season, and on Saturday at Carrow Road, the Liverpool boss was at it again, this time breaking his glasses in the melee which followed Adam Lallana’s last-gasp winner against Norwich. 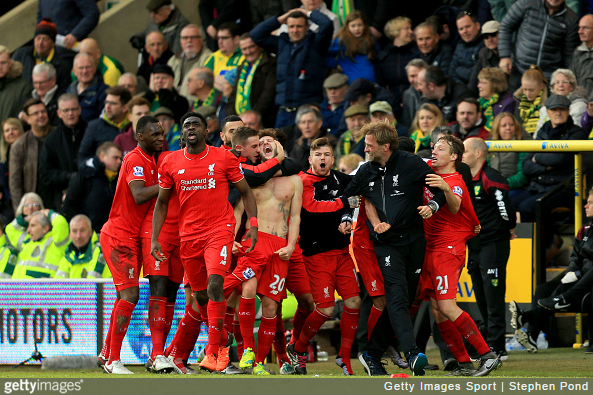 In a game where both sides decided not to bother defending at all, the Reds had already come back from 3-1 down to find themselves 4-3 ahead as the clash moved into injury time. Then, a Sebastien Bassong effort looked to have given Alex Neil’s side a hard-fought share of the spoils.

However, there was one more plot twist to come, with Lallana’s volley hitting the ground before beating Declan Rudd in the Canaries’ goal. Cue intense celebrations, with Klopp once again at the heart of it all, with his specs getting a bashing in the process. This video is superb, by the way!…

After the game Klopp joked about struggling to find his specs, quipping “it’s really difficult looking for glasses without glasses”…

However, as entertaining as these dramatic late goals are for Liverpool, one imagines Klopp would be far happier with a few 1-0s or 2-0s as his side continue to ship goals at an alarming rate.