Jurgen Klopp’s first season in the Anfield hot-seat will end in a Wembley final after Liverpool edged past Stoke at Anfield via a penalty shoot-out.

Taking a 1-0 advantage into the second leg on Tuesday evening, the hosts conceded on the stroke of half-time, when Marko Arnautovic netted from close-range.

Marco van Ginkel and Roberto Firmino both hit the frame of the goal but ultimately the contest would end in a classic nervy penalty shoot-out.

Ex-Liverpool beanpole Peter Crouch saw his spot-kick saved by Simon Mignolet before Emre Can saw his effort hit the post. But then Potters’ defender Marc Muniesa was thwarted by Mignolet, leaving Joe Allen to fire home the winning spot-kick to make it 6-5 and send the Merseysiders to Wembley.

After the game, Mamadho Sakho posted this pic from the joyous Reds’ dressing-room… 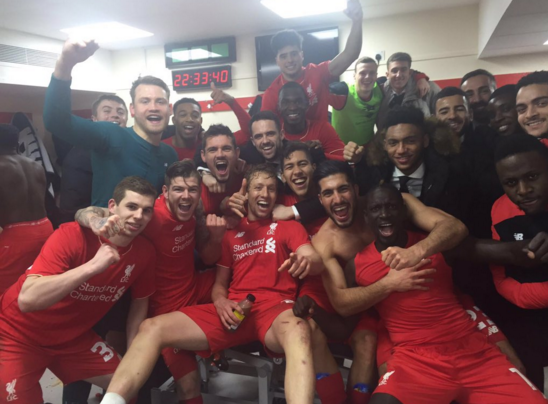 Liverpool will face either Manchester City or local rivals Everton in the Capital One Cup final at Wembley on February 28th, as Klopp looks to bag some silverware in his first season in England. As for Mark Hughes’ Stoke, they can count themselves unlucky after a fine away display.