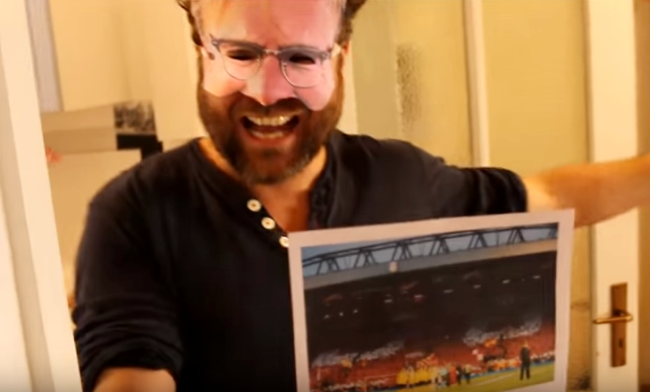 The fellow you see afore you, wearing the unsettling Jurgen Klopp half-mask, is none other than Paulus Muller, friend of Klaas Reese – a German football blogger and a lifelong Hannover 96 supporter for his sins.

Klaas made the mistake of making a wager on Twitter before Borussia Dortmund’s Europa League quarter-final second leg against Liverpool last week in which he bet that, if Dortmund stuffed it up, he’d record his very own version of ‘You’ll Never Walk Alone’ and post it on Youtube for the world to laugh at…

Lo and behold, Liverpool produced a comeback for the ages to beat Dortmund at Anfield, leaving our hero with his end of the bargain to keep up.

Having acknowledged his defeat, Klaas set about recording his masterpiece.

Several days later, Klaas emerged, not only with the finished song but with a music video (of sorts) to accompany it.

Here, damen und herren, is the pay-off, and it’s really rather sweet and haunting once you get over the slightly serial-killer-esque imagery involved…