Ahead of EURO 2016, UEFA has published its latest rankings for players from teams involved in the competition, with none other than England’s James Milner named as the fifth best player.

The ‘SOCAR Player Barometer’ uses performance data for both club and country from the start of 2016 for its rankings, with only Cristiano Ronaldo, Zlatan Ibrahimovic, Antoine Griezmann and Dimitri Payet outdoing Milner. Nothing ‘boring’ about that!

Interestingly, Danny Drinkwater, left out of Roy Hodgson’s final England squad for the Euros, currently finds himself as the eighth-highest ranked English player.

The Barometer runs official player statistics through a specially designed algorithm to create rankings based on player performances.

Player data from qualifying formed the initial basis for the rankings, which have taken into account performances for club and country from 1 January 2016.

The data considered for each player is specific to the position type. For example, tackles and interceptions are considered to be key statistics for defensive midfielders, while successful dribbles and crosses are core stats for wingers.

As for Milner, the 30-year-old has flourished under Jurgen Klopp and will provide Hodgson with a reliable and somewhat under-appreciated option in midfield in France.

Here’s a handy list of the most notable entries (via the BBC)…. 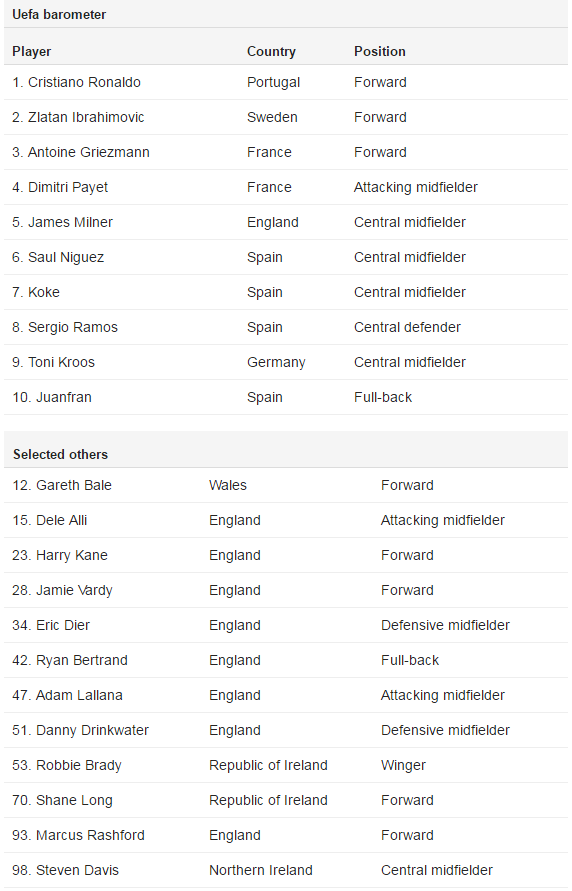