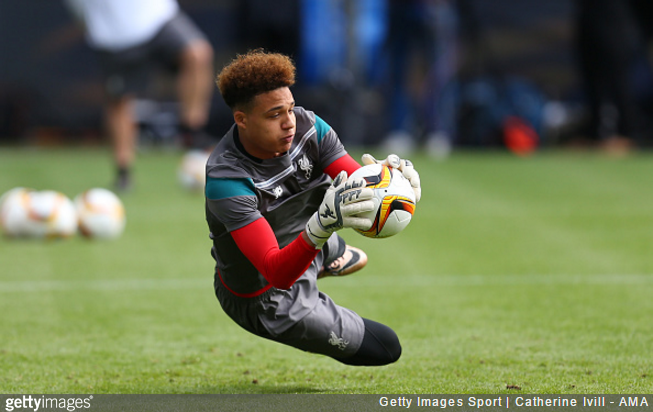 Faced with a dearth of options on the bench, Liverpool boss Jurgen Klopp was forced to delve deep into his Under-18 squad during Wednesday night’s friendly against Huddersfield.

Indeed, following an injury to Lucas Leiva mid way through the second half, Klopp was steeling himself to see out the game with 10 men when he was reminded by his coaches that he still had one body left on the bench.

That body just so happened to belong to 18-year-old Shamal George who, despite being a beanpole of a goalkeeper, found himself being deployed as an auxiliary striker – playing just off lone striker Danny Ings for the remainder of the match.

65: Lucas has come off. Who replaces him? No substitutes other than Shamal George, so on comes the goalkeeper! [0-1]

However, Shamal wasted little time getting stuck in and quickly managed to get in amongst the action…

It never was, ref!

Liverpool eventually ran out 2-0 winners, though sadly George didn’t manage to get himself on the score-sheet.

After the Reds won a late penalty, the crowd were begging for their new teenage striker to take it. Sadly, Alberto Moreno defied the collective wishes of everybody in the stadium to tuck it away.

However, George later explained to Joe.co.uk that he won’t be harbouring any grudges against the Spanish full-back:

I saw Moreno grab it so I didn’t want to take it off him, it would have been disrespectful, even though the crowd wanted me on it.

Hopefully there are plenty more moments for me as striker or goalkeeper. I’m easy.