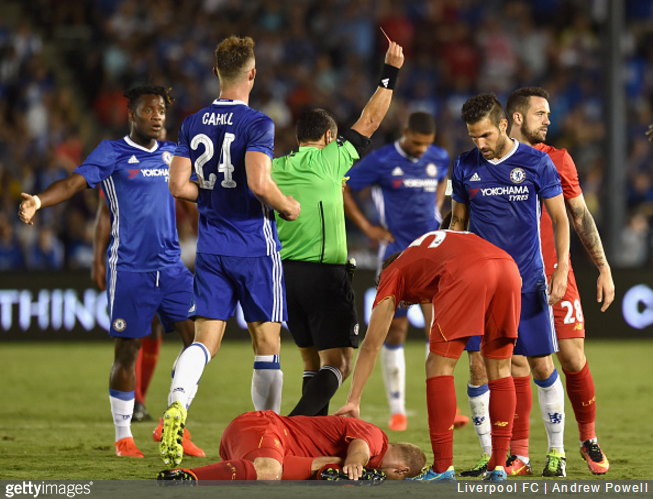 Chelsea midfielder Cesc Fabregas has apologised – and rightly so – for chopping down Liverpool debutante Ragnar Klavan with a needlessly over-zealous tackle during the latter stages of last night’s International Champions Cup friendly between the two Premier League sides.

Fabregas was shown a straight red card in the 70th minute after felling the Estonian defender with a rash, late lunge as Chelsea went on to win the game 1-0 at the Pasadena Rose Bowl.

Steady on, Cesc. We know the International Champions Cup is an elite and prestigious affair, but still…

Thankfully, Klavan escaped without serious injury and was able to finish the match after receiving a bit of treatment on the pitch.

Even so, we can’t help but feel that Chelsea’s official take on the challenge was a little generous in Fabregas’ favour. 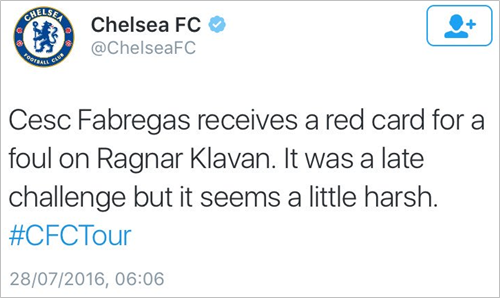 Both Fabregas and Blues boss Antonio Conte apologised after the match, with Jurgen Klopp also confirming that the Spaniard entered the Liverpool dressing room after the final whistle to offer a personal apology to Klavan.

“It’s a red card and I hope it’s not a mentality issue,” Klopp told the press.

“He (Fabregas) came in the dressing room and said sorry, he came too late in the challenge.

“Sometimes in life if you are too late then you get a red card. That’s how it was.”