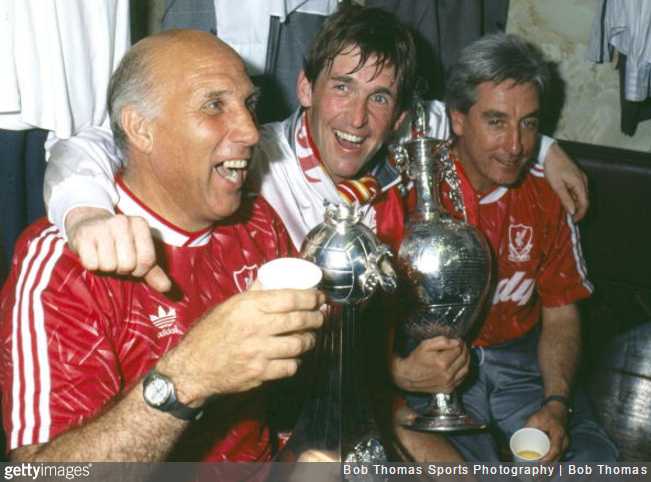 The sad news doing the rounds this morning is that Ronnie Moran, bona fide Liverpool club legend, has passed away at the age of 83.

Moran joined the Reds as a 15-year-old in 1949 and duly spent his entire playing career at the club, making 379 appearances, many of which as captain.

He then moved into coaching at the behest of Bill Shankly, thus forming part of the iconic ‘Boot Room Boys’ alongside Shanks, Bob Paisley, Joe Fagan and Reuben Bennett.

Indeed, when Moran officially retired in 1998, he bowed out as Liverpool’s longest-serving employee, winning and/or overseeing 44 trophies in nigh-on 50 years at Anfield.

No wonder they call him Mr Liverpool.

Liverpool manager Bob Paisley is flanked by Ronnie Moran (left) as he makes his way to the dugout before Liverpool’s European Cup-Winner’s Cup tie against Ferencvaros in Budapest, Hungary, 1974

Ronnie Moran in all his Umbro-clad glory, 1975

Serving as a physio at the time, Ronnie Moran packs away his towels in the Anfield kit room, 1976

Ronnie Moran enjoys a beer in the spacious communal bath at the Camp Nou, 1976

Ronnie Moran puts Ray Clemence through his paces during a training session, 1977

“He’d bollock you whether you deserved it or not!” – Roy Evans

Ronnie Moran (alongside his beautiful Gola kit bag) roars instructions from the dugout, 1977

Ronnie Moran gives Alan Hanson’s fleshy bits a massage at Anfield after a 4-0 win over Watford, 1987

Ronnie Moran celebrates with Kenny Dalglish and Roy Evans after beating Derby to secure the Division One title, 1990

He really was one of a kind. Here’s our favourite Moran anecdote, courtesy of Kelly Cates…

Ronnie Moran would take medals into the dressing room and tell players to "Take one if you think you deserve it."👌🏼 pic.twitter.com/VG7E7eKRXB