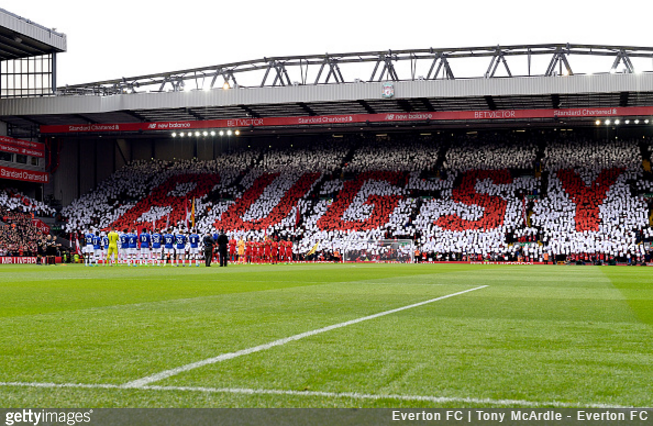 Liverpool comfortably saw off beloved neighbours Everton in the Premier League’s early kick-off to bolster their top-four aspirations by drawing level, at least temporarily, with Tottenham in second place.

Of course, the afternoon’s entertainment began with an emotional Anfield chorus of ‘You’ll Never Walk Alone’ in tribute to Liverpool legend Ronnie ‘Bugsy’ Moran, who passed away on 22nd March.

As for the derby itself, Sadio Mane again proved to be the catalyst, taking just eight minutes to open the scoring by yomping through the Everton defence before steering an elegant angled finish past the wandering Joel Robles…

Shortly after clearing a Philippe Coutinho effort off the line at one end, Phil Jagielka played an integral part in snaffling an equaliser for Everton up at t’other.

However, the parity lasted all of two minutes – Coutinho quickly restoring Liverpool’s lead by darting into the Toffees’ box and curling home a really rather superb finish…

Being a local derby, there was a light smattering of naughty-ish challenges for referee Anthony Taylor to deal with, with Ross Barkley lucky to escape with just a yellow card for planting his studs into Dejan Lovren’s calf…

Unfortunately, Liverpool were dealt a major blow in the early stages of the second half when Sadio Mane suffered what looked suspiciously like a season-ending injury.

Attempting to block a Leighton Baines clearance, Mane’s foot caught awkwardly in the turf, buckling his knee and leaving the forward writhing in pain on the floor…

“I’ve met him in the dressing room,” the German coach said with an air of resignation. “It doesn’t look too good.”

That said, Divock Origi, the man who replaced Mane in the 57th minute, didn’t take long to prove himself an adequate replacement, scoring just three minutes after entering the fray with Robles on the meander once again.

And that, ladies and gentlemen, is how it finished.

At time of writing, Liverpool are joint-second with Spurs on 59 points while Everton stay in seventh, on 50.