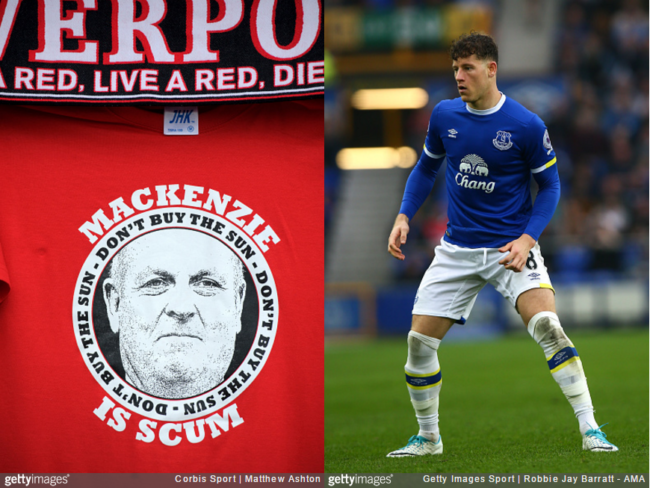 The Sun have suspended former editor Kelvin MacKenzie over a truly despicable, unprovoked column in which, among other things, Ross Barkley was described as “thick” and “the missing link.”

As you’re probably aware, McKenzie is utterly loathed on Merseyside for his reprehensible, unrepentant conduct during The Sun’s coverage of the Hillsborough disaster and the subsequent 27-year legal battle for justice fought by the victims’ families thereafter.

Published on Friday, the very day before the Hillsborough anniversary, McKenzie this time went after an Evertonian, penning an entirely unnecessary and nasty hatchet job about Barkley in which he referred to the Toffees midfielder as one of England’s “dimmest” footballers, likening his “lack of reflection” to that of “a gorilla in a zoo.”

He also threw in a few tired anti-Liverpool slurs for good measure, just to ice the dog turd in fitting style…

More diabolically reprehensible, consciously offensive tripe from Kelvin McKenzie, who is paid £300k a year to knock this shit out… pic.twitter.com/fJDbzAwfOd

Just to compound matters, The Sun also published (and latterly removed) a picture of a gorilla alongside an image of the player, with the caption “Could Everton’s Ross Barkley represent the missing link between man and beast?”

Yep. It really was that blatant.

Liverpool Mayor Joe Anderson duly confirmed that he had reported the article to the police as a racial slur, on the basis that Barkley’s father is Nigerian – the connotation being abundantly clear.

Not only is it racist in a sense that he is of mixed-race descent, equally it’s a racial stereotype of Liverpool.

It is racist and prehistoric.

Mayor Anderson later tweeted to confirm that he had given a statement to Merseyside Police and had also reported the article to the Independent Press Standards Organisation.

Meanwhile, The Sun released a statement to announce that MacKenzie – who is reportedly paid £300,000 per annum to spew this kind of muck – had been suspended with immediate effect:

The views expressed by Kelvin Mackenzie about the people of Liverpool were wrong, unfunny and are not the view of the paper.

The Sun apologises for the offence caused.

The paper was unaware of Ross Barkley’s heritage and there was never any slur intended.

Mr Mackenzie is currently on holiday and the matter will be fully investigated on his return.

Yes, MacKenzie was responsible for writing that tripe, but getting it subbed, edited and published on the paper’s website was hardly a one-man job.

It really is appalling, from top to bottom.