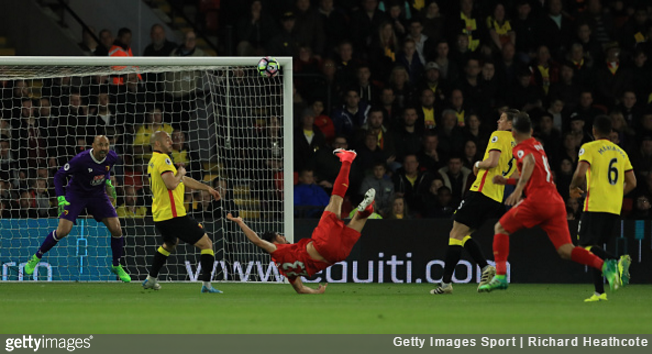 Emre Can scored a definite contender for goal of the season on Monday night, as Liverpool battled to a 1-0 win away at Watford to keep their top four hopes very much alive and kicking.

Overall, the game at Vicarage Road was a poor affair, not helped by the loss of an injured Philippe Coutinho early on.

Coutinho’s replacement, Adam Lallana, did go close on 41 minutes, with his superb first-ime volley cannoning back off the crossbar.

However, just before the break, Can scored a stunner, perfectly executing a magnificent overhead kick from a Lucas Leiva pass.

Not surprisingly, the German midfielder was rather proud of his wonder-goal, saying:

That is the best goal I’ve ever scored.

I saw the space and I ran behind and my first thought was I wanted to head it, then I didn’t think too much.

The hosts rarely threatened the Liverpool goal in the second-half, although Sebastien Prodl did hit the frame of the goal at the death when he should have scored.

However, the Reds were deserved winners overall, taking back a precious three points to Merseyside.

Jurgen Klopp and co. now find themselves  in third spot, four points ahead of fifth-placed Manchester United, who have a game in hand.

As for Watford, they stay 13th, a healthy eight points clear of the drop-zone.