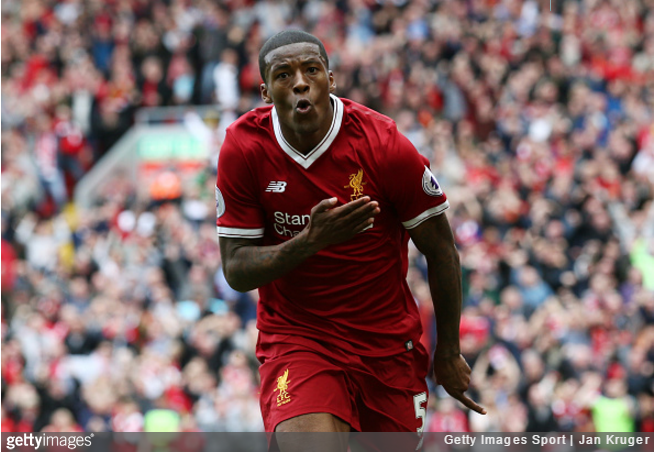 Not content with scoring the goal that effectively sealed Liverpool’s Champions League qualification, Georginio Wijnaldum followed up his on-field heroics with a timely demonstration of good-eggery on the final day of the season.

Indeed, the Dutch midfielder shelled out £250 to treat a young Reds fan to the football boots of his dreams during a post-match shopping excursion in the city centre.

Limerick lad Patrick Mackessy made the trip to Anfield with his mum Louise to watch his beloved Liverpool beat Middlesbrough, before venturing to the Adidas Store in town.

It was there that he bumped into his hero Gini, who himself was enjoying a casual browse around the football section.

After pointing out his favourite boots (a £250 pair of black/pink Ace 17+ Purecontrols, should you be interested) to Wijnaldum, Patrick and his mum left the shop, only to be called back in by a member of staff.

We had left the store and Paddy was telling me [about Wijnaldum] as we were walking down the street.

Then we looked behind and the lady from the store had been running after us and she said: ‘Can you come back to the store, he wants to buy Paddy the boots’.

He had bought them at that stage – he’s such a nice guy, so approachable and very friendly.

I went over and shook his hand and said ‘you’re so nice’ and he was like ‘no problem, no problem’.

The pair then took a picture together, leaving Patrick to make his journey home with a couple of top drawer souvenirs in tow.