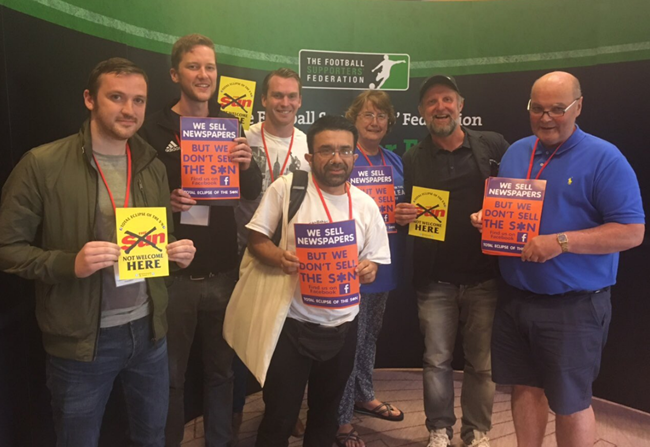 The usual displays of tribalism and back-and-forth were set aside over the weekend as fans of 70 clubs from the Premier League and Football League called on local retailers and their clubs to ban The Sun newspaper.

At Sunday’s annual Football Supporters Federation summit, a motion calling for the Rupert Murdoch-owned paper to removed from sale in shops, supermarkets and other places of business up and down the country was passed unanimously…

Fans of clubs such as Manchester United, Arsenal and Chelsea want to emulate the work of Total Eclipse Of The Sun, a campaign group created in Liverpool that eventually persuaded most retailers in the city to stop stocking the red top.

The Sun has long faced justified opprobrium from supporters of Liverpool and other teams after their slanderous and scandalous coverage of the Hillsborough disaster. In their reports, they claimed that Liverpool supporters stole from the dead and dying as well as attacked emergency service workers.

28 years on from the tragedy and their lies, The Sun has issued little more than half-hearted apologies.

Speaking to the Liverpool Echo after the motion was passed, Roy Bentham, a member of Liverpool supporters group Spirit Of Shankly said:

We are absolutely thrilled that the motion was passed and passed unanimously.

Usually a motion will create some debate or amendments, but this just passed straight through without a single delegate voting against it.

It means that all these fans groups up and down the country will now go and put pressure on their clubs to ban The S*n and to call on shopkeepers and vendors around the grounds to stop selling it.

Last season both Liverpool and Everton banned The Sun journalists from attending press conferences and entering their stadiums to report on games.

The motion agreed upon by supporters comes less than a week after the Crown Prosecution Service stated that six officers involved in the tragedy will face numerous charges.

David Duckinfield – the officer in charge of policing at the game – will face 95 manslaughter charges.