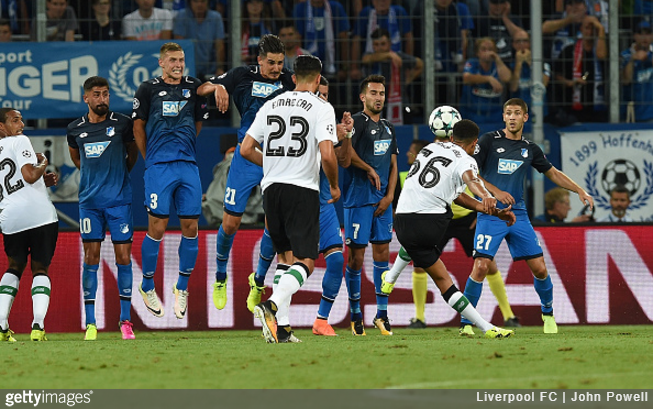 Liverpool will take a 2-1 aggregate lead into the second leg of their Champions League group stage play-off against Hoffenheim at Anfield next week, thanks largely to a flash of inspiration from teenage right-back Trent Alexander-Arnold.

The 18-year-old, making his debut in European competition, wrapped his foot around a beautiful low freekick to put Jurgen Klopp’s side ahead against the run of play in the 35th minute.

Be sure to stay tuned for that sweet, sweet reverse angle replay…

Liverpool then slowly dragged themselves back into things, going 2-0 up mid-way through the second half thanks to a James Milner cross, which the substitute expertly deflected off Havard Nordtveit’s thigh and into the far top corner.

Hoffenheim then nabbed themselves an away goal through Mark Uth, who gave Alexander-Arnold a run for his money in the ‘Goal of the Night’ stakes with a superbly executed chest trap and drive…

Hoffenheim coach Julian Nagelsmann was in spiky form after the match, refuting Jurgen Klopp’s bold assertion that Liverpool allowed the home side to have possession in certain areas of the pitch all night by spitting:

He (Klopp) would say that, wouldn’t he? He won’t say ‘Hoffenheim played well and we were shit.’

The second leg (at Anfield next Wednesday) is shaping up to be a total bitch-fest!