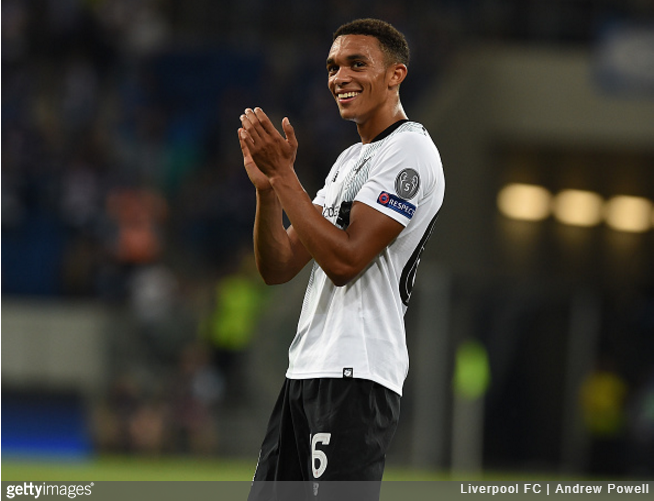 Trent Alexander-Arnold’s star is on the rise at the moment, especially in the wake of the teenage full-back’s superb freekick goal against Hoffenheim earlier in the week.

Ex-Liverpool stalwart Jamie Carragher heralded his young successor’s efforts directly after the match, sharing on social media what he thought was a photo of the pair together back in 2009, when Alexander-Arnold was a mere 10-year-old slip of a lad.

The picture, which was originally circulated by Sky Sports when Alexander-Arnold first crept into the first-team frame last year, supposedly shows the youngster serving as Carragher’s matchday mascot before a League Cup tie against Leeds at Elland Road.

However, 19,000 retweets later and the Liverpool Echo have gone and debunked the image entirely.

Indeed, the newspaper have done a little digging and found that – surprise, surprise – the lad in the photo isn’t the same boy that tucked a curling effort inside Hoffenheim’s post on Tuesday evening.

The boy acting as Carra’s player escort is in fact 19-year-old Reds fan Dion Simpson, who has no earthly idea why Sky Sports and the internet at large keep attempting to pass him off as Alexander-Arnold.

I was a mascot back in 2009 against Leeds away, which is my hometown.

And then last year Sky put some footage out on Sky Sports News which they thought was Trent, just before the recent EFL Cup game against Leeds last year.

Then it went viral all last year – and now Carra has brought it back up again!

It’s only just died down, but now it’s gone even worse because Carra has posted the picture.

Turns out Alexander-Arnold himself is also fairly bamboozled by the whole escapade, with Carragher revealing the following text exchange that appears to have leaked directly out of the Liverpool dressing room…

Was sent this after the game! pic.twitter.com/W1HCjU5fWh

The jig is up Carra. Time to turn yourself in at your local constabulary.