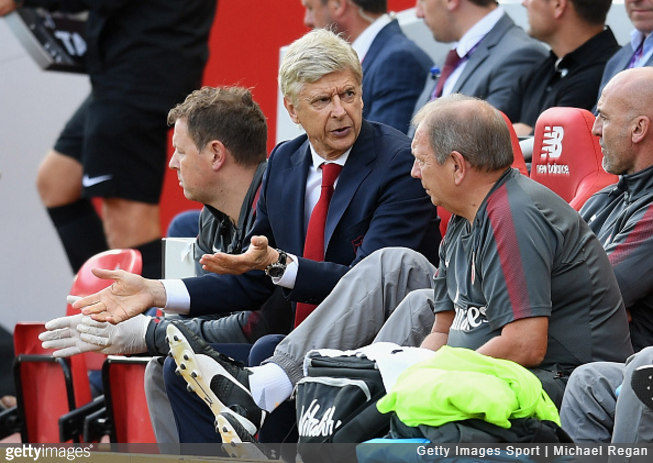 There’s no two ways about it, Arsenal were at their gossamer-thin worst against Liverpool on Saturday, with Arsene Wenger’s expensively-assembled melange of meek and mild succumbing to a 4-0 defeat at Anfield.

Of course, a palid Arsenal performance is nothing but good news for the pundits and co-commentators of the world who, wide-eyed and partially inebriated by their blood-thirst, were gifted yet another chance to clamber over themselves and begin tearing strips of easy meat off the carcass laid so readily before them.

Arsenal deserve battering. [This is] the most disappointing Arsenal you could possibly wish to see.

The general attitude, and lack of respect towards the shirt by three or four of the players. They (the Arsenal fans) must be livid.

Honestly, I’d stick them (the players) all on the transfer list. Ain’t many of them will get a better club than where they’re at now.

Still seething but having been given a little time to elucidate, Neville then offered a similarly stinging epilogue in the studio after the match:

When you’re at a football club, you all take the blame. I can’t personally look any further than the players.

I don’t think the team is correct. setting up with [Granit] Xhaka and [Aaron] Ramsey in central midfield at Anfield, with Sanchez and Ozil just outside them is never going to be enough with Liverpool the way they are. I’ve never understood the lack of attention to the opposition.

You have to pay attention to the threats and Arsenal never do that in games.

The issue today I had in the first 15 or 20 mins – and why I was as scathing as I was – is because [Mesut] Ozil, [Alexis] Sanchez, [Alex] Oxlade-Chamberlain, Xhaka, Ramsey, they didn’t do most basic things I think every fan, manager, and player knows: when the ball goes past you and it goes towards your goal and your team-mates are struggling, you run back as quickly as you can.

Neville’s excellent diatribe continued as he set about chastising Arsenal for making basic errors that should have been drummed out of them as children:

I’m naming those five – there may be more – but that is absolutely disgraceful. That doesn’t represent the Arsenal shirt or what they’re about and they’ve let themselves down as individuals. In terms of who’s to blame, I can only start and end with that.

In terms of the tactics, the football, the mistakes, you’d need five Monday Night Footballs to analyse what went wrong there. But the simple premise of working hard, getting back towards your own goal – it’s just unacceptable.

Nev then referred back to his earlier comments made during the match, about Arsenal deserving their tonking and that most of their players would be lucky to escape being put up for sale with immediate effect:

People might say Sanchez but he’s been throwing the towel in over the last six, seven months. He’s a fantastic player – a tiger at his best – but he’s not covered himself in glory recently.

If he went to another club, he might give you a couple of good years but what’s to say he wouldn’t do the same?

Neville was then asked if fans were within their rights to start agitating with ‘Wenger Out’ sloganeering again, but he instead insisted that the blame should lie entirely at the feet of the players:

[The ‘Wenger Out’ campaign] was raging all the way through last season. I’m still adamant I wanted to see Arsene Wenger at the football club – I don’t change that, I never will and ultimately that’s just a level of respect from my point of view.

You don’t turn on managers and coaches. Wenger deserves the utmost respect but his players, time and time again, are letting him down and he shows too much loyalty to those players.

Some of those players have been at the club for a long time and they’re not doing it for him. When they’re crossing that white line, they’re not giving the absolute maximum.

He was dejected in that interview, I feel for him but I’m not going to start sticking the knife in and saying he should go. Of course, you look at Wenger – and he’ll look at himself.

There is, after all, one constant in all this.

The board made the executive decision to afford Wenger two more years, so they can probably look forward to two more years of the same old frailties, all of them singularly unaddressed as per.

The way Pies see it, everybody working at Arsenal is complicit in the vainglorious, faux-elite shell they’ve become over the past five years.