Liverpool defender Dejan Lovren has revealed that he has received a death threat against his family on Instagram.

Lovren has been heavily maligned for some abject performances of late, with ire reaching a pitch when the Croatian centre-half was hooked off after just 31 hopeless minutes in the Reds’ 4-1 defeat against Tottenham a couple of weekends ago.

Obviously driven to some kind of moronic frenzy, one ‘fan’ out there sent a direct message to Lovren on social media, threatening to “murder” his family. 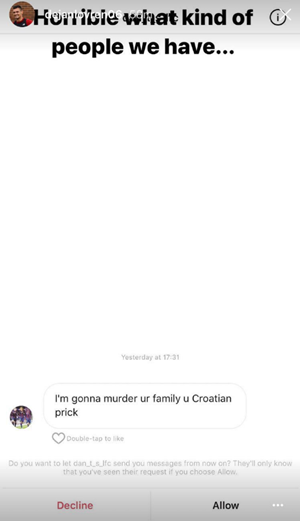 Lovren responded with a statement of his own, saying:

I don’t mind when people talk sh*t about me, it says more about them.

But I cannot ignore when my family is threatened. I just can’t and won’t accept that.

He’s not wrong. However porous he’s been at the back for Liverpool, nothing warrants such trenchant idiocy.

While you have to assume that the threat isn’t serious, of course it should be treated as such.

Here’s hoping Lovren reports the Instagram user responsible and the police take it from there.

Some football fans – and we use that word in the most tenuous sense – really are at the very vanguard of base, tribal stupidity.