According to statistics released for 2016, Nora is the most popular name for baby girls in Norway at the moment, with hundreds of newborn diddums being christened as such (or variations thereof) that year.

However, a brand new moniker has entered Nordic circulation after Liverpool fan Kent Solheim decided to name his two-week-old child after his beloved football club.

Hailing from the city of Sandefjord near Oslo, Kent and his partner Carine are now proud parents of a beautiful bouncing baby girl by the name of ‘YNWA’…

The life-long Liverpool supporter had to convince his girlfriend to choose the unusual name https://t.co/tP4d8r34Xv

Apparently, the little girl’s full name is officially YNWA (pronounced “unn-wah”) Sofie Solheim after Mum was also allowed to contribute a name of her choosing.

Speaking to the Liverpool Echo, Kent shared his thought process:

It started last summer when we knew we were having a girl, so we decided to give her one name each. I’ve followed Liverpool all my life so I wanted to call her ‘YNWA’.

She (Carine) was happy until I told her that I wanted to spell it with a ‘W’ and then it was a little discussion and she agreed.

Asked what his friends and family make of the name, the 29-year-old Reds fan replied:

Most of the football interested guys they know the meaning, but people think it’s a nice name.

They don’t like the meaning of the name as much if they support Manchester United.

Yes, the spelling is a little clunky (and capitalised) but we happen to think that ‘Unn-wah’ is a lovely, Scandi-sounding utterance.

Wonder if she’ll get the matching tattoos when she’s old enough? 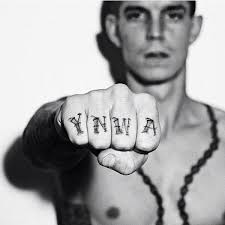